Well – the weather outside is gross so we thought we’d start our post with a nice sunset! It’s the afternoon on Sunday 6th July; we’re enjoying tea and Marmite toast as the rain runs off Heidi’s roof on the seafront at Dunkerque.

On Tuesday 1st July after weeks of preparation, we filled and emptied Heidi’s tanks, before saying farewell to our spot at 7a and starting our journey East. Our evening destination was Stevenage to visit Steve; Peter’s friend from school, who we last saw at our wedding nearly seventeen years ago. On route we rested at Startopsend, near Tring, a set of stairway locks on the Grand Union Canal; and walked round the nearby Reservoirs built as a water supply to the canal. 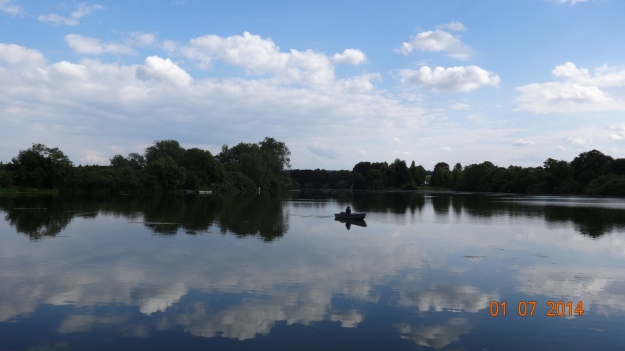 The following morning after a very pleasant evening with Steve and Virginia we trundled on the motorway to Kent, spending the afternoon at Minnis Bay near Margate. Peter then spent a frustrating few hours trying sort out our new Toggle SIM so we can keep in touch throughout Europe.

Our last night stop in the UK was overlooking the Dover Straits near the of village St Margaret at Cliffe.  After a leisurely start to the day and a final English breakfast; on Thursday 3 July a little after 1pm we boarded the ferry to Calais. Auf Wierdersehen England!

Coastal views from ‘The Lookout’ at St Margaret at Cliffe

We disembarked at 16:00 local time and were quickly out of the port and on our way to Dunkerque 45km away. Heading to a motorhome ‘official’ parking spot on the East end of the Avenue de la Mer. This spot we found to be full so we carried on a little further down the coast to Zuydcoote and parked just behind the dunes; a good spot just a few minutes walk from the beach.

With this year being a 100 years and 75 years since the start of the First and Second World Wars respectively, we were keen to learn more and remember those who fought.

At sunset we walked along the beach at low tide to the wreck of the ‘Crested Eagle’.  A Thames Paddle Steamer used as minesweeper during the Second World War. She was bombed by German aircraft on 29th May 1940 during the evacuation of the British Army from the Dunkerque beaches. At the time the Crested Eagle was carrying 600 soldiers plus crew, she caught fire and ran aground at Zuydcoote with the loss of over 300 men.

It was one of many similar paddle steamers used. The restored ‘Princess Elizabeth’ now resides here in the harbour and interestingly for us Bristol Channel sailors, the ‘Waverley’ was also amongst them. 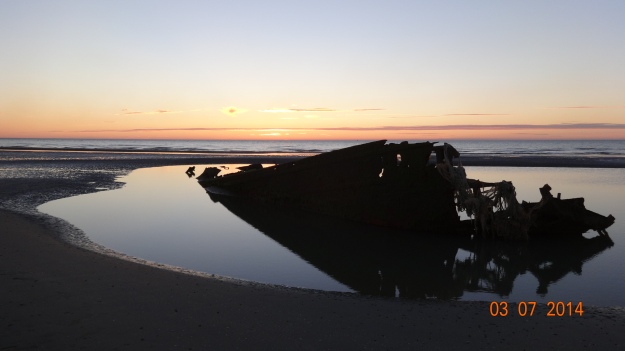 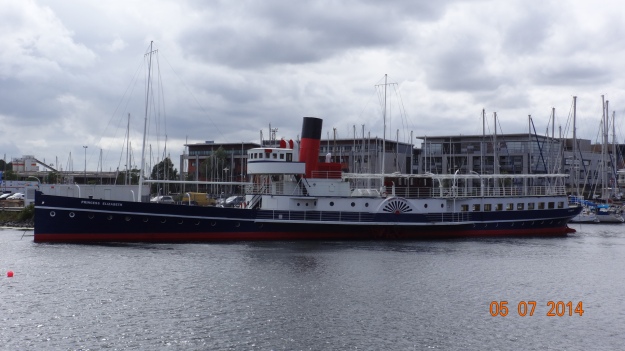 The ‘Princess Elizabeth’, one of many civilian ships used in the evacuation

The next morning we got on our bikes go exploring! The first place we stopped was the Zuydcoote Military Cemetary. There are casualties from both the First & Second World Wars buried here. Those from the First World War were fighting on the Nieuwpoort Sector of the Western Front in 1917 and died in the hospital here in Zuydcoote – mostly now empty and derelict. The soldiers from the Second World War were French who, ‘mort pour la France’, fighting in the Battle of Dunkerque 25 May to 4 June 1940.

English French and German; as well as Christian Muslim and Jewish..

WWI – German soldiers, Christian & Jew side by side 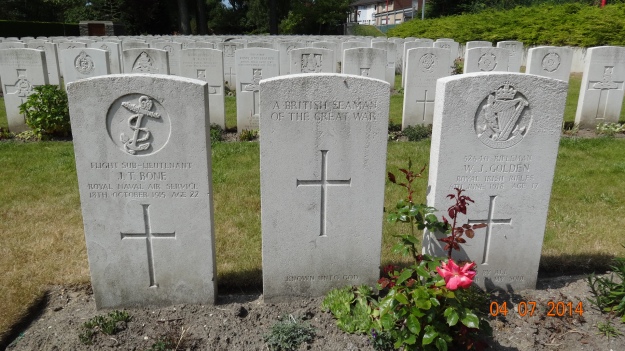 It’s hard to understand how a gunshot in Serbia on 28th June 1914 could lead to all this!

In quiet reflection we leave the cemetery and cycle to seafront at Bray-Dunes before returning to Heidi via Carrefour!

Saturday morning it rained and rained and then rained some more. Finally at lunchtime the clouds cleared and we set off on our bikes again; along lovely flat roads in to Dunkerque.  Passing the Fort de Dunes, a military fortification built under the sands to protect the port of Dunkerque after the Franco-Prusian War of 1870.

We finally made it to the Basin du Commerce, where they had kindly laid on some entertainment for us!

..back to Dunkirque with Heidi, ready to visit The Memorial du Souvenir (Battle of Dunkirk and Operation Dynamo Museum) in the morning.

..the view’s not bad though

Back from the museum http://www.dynamo-dunkerque.com and feeling educated..

Operation Dynamo, carried out on the 26th May to the 4th June 1940, led to the evacuation of the British Expeditionary Force and thousands of northern French soldiers. It was the largest evacuation effort in military history, and an unimaginable success after the humiliating defeat of being surrounded and overcome by the German Nazis. A ‘miracle that allowed 338,226 allied soldiers, including 123,095 French and 16,816 Belgian soldiers to escape the hell of Dunkirk.

They were evacuated by a huge fleet of British military, but also hundreds of civilian ships and small private boats ‘the little ships’, who picked soldiers up from the harbour’s East Mole, where we are parked. They also made makeshift ‘jetties’, out of lines and lines of trucks put in place at low tide, further along the beaches so that the larger ships could come alongside – ingenious!

Of course, a great many didn’t make it. 4,534 who have no known graves are remembered in the nearby British Memorial.